I finally picked up the first Private Eye of 2018 on the morning of the 8th with all the intent of reading during my break, instead the day got away from my control and by the time I got home I was exhausted and so tired my eyes wouldn’t play ball and focus. I eventually climbed into bed though after twelve and made a good attempt of at least quickly reading some of the cartoons and having a peek my favourite column. Sadly in place of the Nooks & Corners column there was instead an obituary to its writer of near forty years ‘Piloti’ otherwise known behind the punning pseudonym as Professor Gavin Stamp, who very sadly had passed away in December. 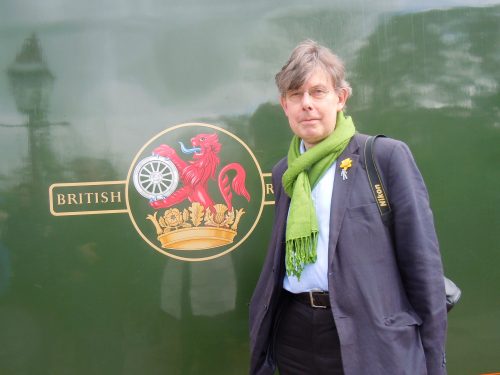 The shock that news had on me at such a late hour and being so overtired cannot be properly explained but it took me longer to nod off after reading it than usual as I lay in bed fretting, greatly saddened by the news. For anyone who loved and worried over our building/physical heritage Stamp’s articles as Piloti were a must read and worryingly catalogued every loss of architectural importance and every abuse of town planning or uncaring and unsympathetic redevelopment in our urban areas. It was instrumental in changing opinions and even being the first time some people had even heard about any such plans to demolish or ‘revamp’ well-loved buildings in their local areas and in some cases it played a role in even halting the destructive tendencies of urban-developing avarice disguised as ‘progress’ as it snaffled up more and more to just leave behind bland nondescript monolithic Lego buildings in its wake. Sometimes it was home to good news such as when he happily reported that some hare-brained scheme had faltered or failed due to planners being defeated in meetings (rarely) or perhaps more tellingly, that their funding now being withdrawn.

He wasn’t simply a young fogey (a lot is made of his personal style which hardly sums up his writing or tastes) against ‘change’ either which is an accusation often levelled at people who bemoan such things as town planning and poor architecture (Lord knows I get that a lot) he clearly recognised things move ever onward and in some cases praised sympathetic alterations or brand new buildings when they had been done with style and panache and great care. It was mundanity of design, poor functionality and near cultural vandalism and short sighted destructive tendencies of modernity’s march (such as the mass loss of the humble yet iconic red telephone box) which agitated Stamp and it’s increasingly clear that’s these are issues which resonate with a great many people young and old across the UK and in many of our towns and cities. Urban centres which are facing such a surge in land grabbing strategic quick building which leaves little thought to anything as important as attractiveness of façade or if the building is at all designed sympathetically to its neighbours.  Nor was it all lamentation for the loss and praise of Redbrick or Neo-Gothic but across the entire history of architecture in this country including some pretty grim & horrible (in my opinion) grey brutalist structures in his list of buildings to defend and some glass & concrete ultra-new builds, especially if those more recent buildings seemed doomed to fall to short-sighted re-designs or remodelling.

His loss is a blow to anyone who still cares about or recognises that the physical landscape informs the cultural one and for anyone who worries about the blight of short sighted redevelopment vandalism in our towns or city spaces often carried out by offshore interests with little to no concern for the history of a place or even the happiness of the people who live there. He was up there in his observations and commentary with the whimsical Betjeman, whom he worked with and then took over the column from on Betje’s death, and the acidic Ian Nairn in his vigorous defence of our buildings and urban green spaces and like them needs to be remembered and used as an example in future. I’ll sorely miss his articles and insights. Nooks & Corners will continue no doubt but whoever now takes it up will have a strong legacy to live up to.