As national stereotypes go perhaps there are worst things than being classed as nation of stiff upper lipped, supercilious, untrustworthy, snidey, cowardly bad guys of epic proportions. For one thing it’s kept our most outrageous and terrible panto-esque Thespians in Hollywood work for many years and frankly it’s rather cool if we’re honest, who wants to be the boring git in the white hat? Although a fallout from this trend has seen the posher side of the English accent become such a cliché and shorthand for utter empirical evil that even when the baddie is supposedly German, Russian or even an alien they’d damn well better have the sort of voice that sounds like a Pathe news reporter circa 1951 and even sees the most unlikely of actors attempt to pull it off. Sean Bean being a good example, when he attempted to do a posh accent to most English ears it sounded like a foreigner … but he is from Yorkshire so that’s pretty much the same thing for most Brits.

There’s a conspiracy theory held dear by many nut cases and right wing fruitcakes (fruit & nut?) that the Hollywood film industry is run entirely by American Jews with a strong bias towards their points of view. This is of course utter nonsense, every Englishman knows that Hollywood is seemingly run by the Irish-American lobby which explains a lot of the typecasting for English actors. 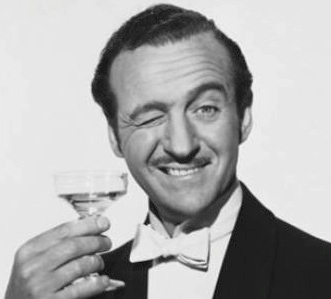 It wasn’t so long ago that the likes of David Niven, Roger Moore and Richard Todd were seen as quintessentially inhabiting the rather more positive English stereotypes of honour, stoicism, fair play and wit whilst the worst of our caddish traits were gloriously displayed by Terry Thomas. And that’s as bad as ‘we’ got. Then things changed, not sure when but I blame the 1980s which is my answer for everything and since then the creeping ease with which this supposed Anglophobia became the norm is now taken for granted.

This is pretty much a work in progress so feel free to suggest anyone for the list. 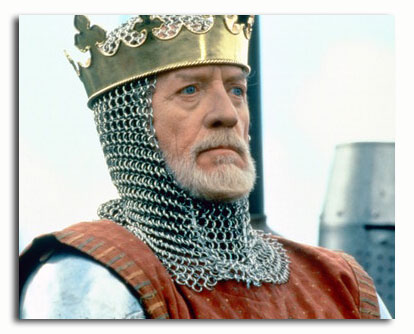 Name: Edward I of England aka Edward Longshanks aka ‘Hammer of the Scots’.

Played by: Patrick McGoohan (American born but grew up in Ireland and UK)

Details: His reputation in England is pretty much that of a strong monarch and by ‘Strong Monarch’ we mean he is seen as being a guy who kicked much arse and took names in the process of doing so thus securing his dominion over the entire country and over those of other nations that also cling to this god forsaken rock we call Great Britain namely the Welsh and the Scots (hence his other cool nickname) and like all true English monarchs he was more a product of foreign upbringing than an English one and had that whole angry Norman side to him that pretty much saw him go tonto at a drop of a hat in battle. Yet he also had a softer loving side which is often overlooked, which he demonstrated when he erected several monuments or ‘crosses’ in memory of his wife at every site that her coffin rested on it’s way for burial in Westminster Abbey. The real Edward was no stranger to leading from the front having fought in the Second Baron’s War, a Crusade and several campaigns against those naughty Welsh before even thinking about getting around to the Scottish wars that have since defined him for many.

In the film though he’s simply an out an out baddie, a spitting raging ball of angry impotent Englishness and the inventor of the (fictional!) law Droit du seigneur. A man who won’t think twice before hurling his sons lover out of a top floor window, the sort of guy who’d also leave the toilet seat up and wouldn’t flush.

Portryal: Think the Jungle Book’s Shere Khan when in a good mood and trying to win someone over and then think of Joe Pesci in Goodfellas after someone’s made a crack about shoe shine boxes when royally pissed off. He likes the colour orange as this must be the only explanation as to why all the English wear it. 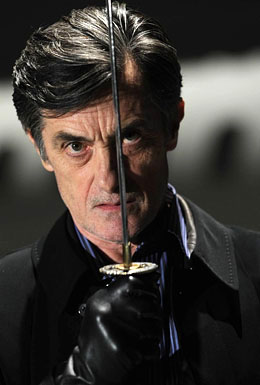 Played by:  Roger Reese (A Welshman!)

Details: A man who would think nothing of employing imploding grenades that sucks everything into one huge crater of deadness, disintegrating old inventors into piles of dust or chopping peoples heads off whilst welding a samurai sword all of which is what he’s doing when we first meet the scamp.

Portrayal: Frankly camp as a row of well aligned tents and falls into the same category of ‘English baddie’ as any number of the Watchers from Buffy the Vampire Slayer. Given his name he could very well be Scottish but the accent alone marks him out for special ‘English Baddie’ status. 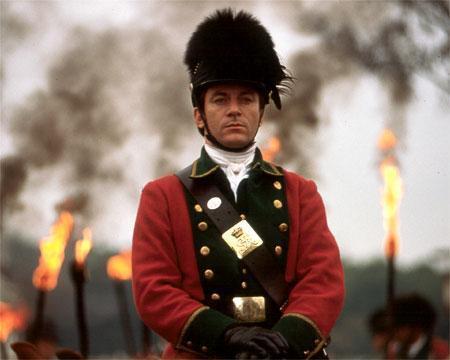 Details: Now, at the time this film caused a real stink in Europe and not just England, ignoring the fact it’s based on a real historical figure of Banastre Tarleton the images of British redcoats (not the guys from Butlins) during the war of independence enacting atrocities and war crimes that the writers supposedly based upon those committed during the Second World War by the SS in France was hardly going to help matters. Outcry followed and for once even the French sided with the English on the matter, then the City of Liverpool, never the most light-hearted of UK citizenry folk or the most likely to avoid a chance of a punch up kicked up a fuss over the portrayal of one of their own (as the real Tarleton had been Mayor of the city- as if anyone cared) and the papers had a field day.

Although as usual it was all forgotten about as soon as the film opened and like Braveheart we all went to see the it and marvel at how utterly evil we English really are and wonder why nobody has invaded us for our own good.

Portrayal: A master-class in duplicity and utter maligned cruelty, this guy is almost kinky with it to boot. Clearly he’s all about the warfare and knows how to kick rebel arse in the process andeven his skin seems to ooze evil. Frankly he’s also the most interesting person in the entire film as well as being the best dressed, shame he get his comeuppance really. Oddly enough in America the character appears to have something of a loyal fan base for his dastardly ways amongst the ‘slash fiction’ bloggers, fan fiction writers and of course the Redcoat reanacting fraternity. I found this quote on one such fan fiction site dedicated to ‘bad boys’ and the last bit rather made me chuckle for some reason. The writer uses the real Lt. Col. Tarleton in their work and felt some explanation as to who he had been was in order.

“Ban Tarleton is a highly fascinating and attractive man in his own right, with more than a little of the bad boy about him, though he never burned a church with people inside.” 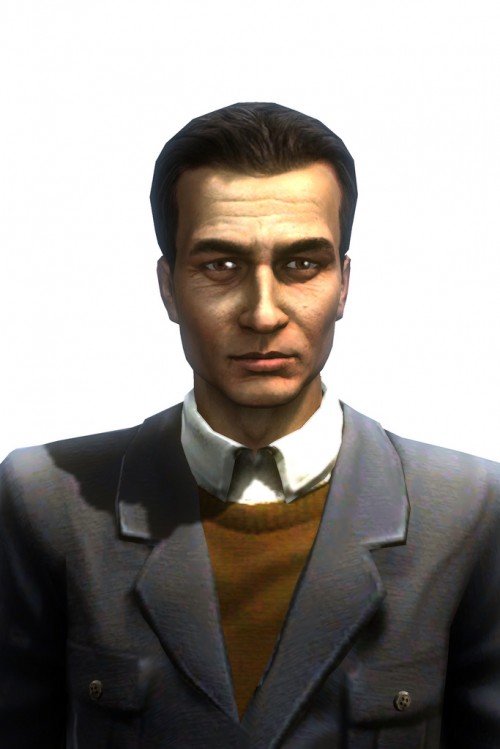 Played by: John Noble (an Aussie!)

Details: The Saboteur was a game that took the true life wartime adventures of an Anglo-Frenchmen William Grover-Williams and keeping the resistance and race car elements then simply chucked the rest out of the window. Its maybe interesting to note that main protagonist Sean Devlin was indeed played by an English voice actor and given how bad that Irish accent was perhaps we can see this as some revenge.

Portrayal:Your pretty basic creepy Englishman here, looks like he enjoys to wear rollneck jumpers whilst smoking a pipe, head of the SOE in occupied France and just oozes smug self assuredness. Clearly rankles Sean and he seems to get off on that truth be told. I can’t tell you any more about the character as the game is bloody terrible so I’ve never been able to get more than half an hour into it without simply ejecting this piece of rot and putting something else into the Xbox instead. 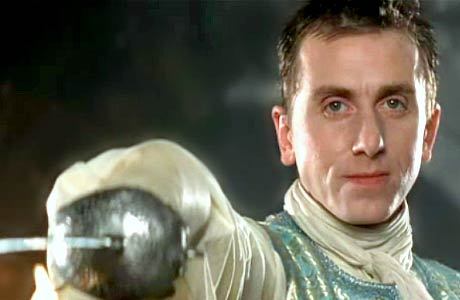 Details: A foppish sword swinging murderer and rapist who commits his vile crimes in an extremely laissez faire manner. In short an utter dick.

Portrayal: Tim Roth does an excellent job at creating a character that goes from comic period piece Macaroni to menacing and truly dangerous nut job in minutes. You clearly understand that Cunningham isn’t just an overgrown spoilt brat but is utterly unhinged and has no empathy for anyone other than himself – but there’s no reason as to why he can’t look good in the process. 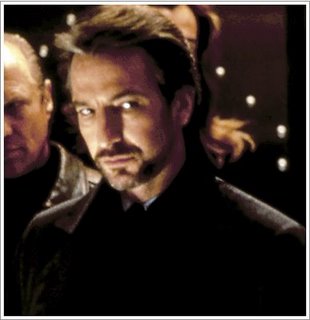 Details: Your average West German psychotic leader of a armed robbery commando team. So impeccable was Alan Rickman’s method acting that he removed himself away from the world of Hollywood prior to the making of this movie going to a small Bavarian village where he spoke in the local dialect, dressed entirely in lederhosen and lived off nothing but sauerkraut, sausages and ‘beesting’ cakes. The end result being that Hans Gruber is in fact just Alan Rickman with only the slightest hint of any sort of German accent, basically making him to all intents and purposes an English baddie in all but name. 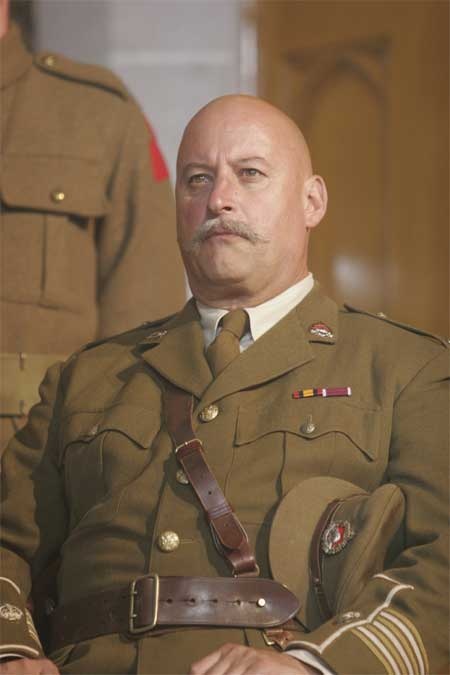 Played by: Brian Jensen (A colonial from Canada)

Details: A film that serves in a similar manner for Canadian armchair revisionist historians and casual Anglophobes to that of Mel Gibson’s ‘Light Horsemen’ for Pom hating Aussies. Paul Goss who some of you might remember from turgid Tea time favourite show ‘Due South’ directs and stars. Whilst the action sequences are rather nifty the film is a mixed bag indeed.

Portrayal: Pompous pig featured, bull necked REMF who whilst in Calgary recruits Canadians for the slaughter in No Man’s Land and never stops banging on about how ruddy great the Empire is. Jingoistic was a word invented to describe this guy. A bully and sneeky with it he ends up somehow close enough to the front to get his throat torn out by some passing shrapnel whilst cowardly whimpering and attempting to duck out of massive ruck, something that doesn’t even appear to raise an eyebrow amongst the sturdy Canadians who obviously never liked him anyway. He’s presumably supposed to be English given his dodgy comments about the Canadians and his love of the Mother country to say nothing of the rather dodgy accent. Although he does get kudos points for the saying the clichéd English phrase ‘sticky wicket’ and somehow managing to make it sound like the most heinous thing ever said to a woman. 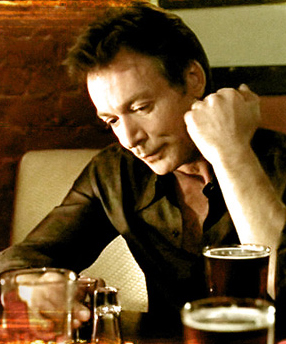 From: Buffy the Vampire Slayer

Details- Powerful English sorcerer but hey aren’t we all? He’s old mates with Giles and whilst Giles sorted his life out and got a steady job at the Watchers Council Payne went a bit dark to say the least. It’s not clear when we first see him if he has any agenda other than finding the chaos he’s caused entertaining.  Soon it all comes out that he and Giles were fellow drop outs at Oxford, listening to their terrible prog rock albums, maybe dropping quality acid whilst table tapping and calling on dark forces… in my opinion they might also have had a ‘thing’ going on. Like Giles he has a wide range of knowledge and research in the paranormal to fall back on and like Giles (and in fact a lot of former public school boys) has a fluency of Latin. In fact let’s just say he’s the ‘Anti-Giles’ and move on shall we?

Portrayal: Well, we’re going to start repeating ourselves now but here goes. Duplicitous, creepy and frankly I wouldn’t trust him as far as I could throw him. His demeanour is really very similar to that of an old drama tutor I knew, in fact he reeks of being an old ‘luvvie’ in his mannerisms and movements.